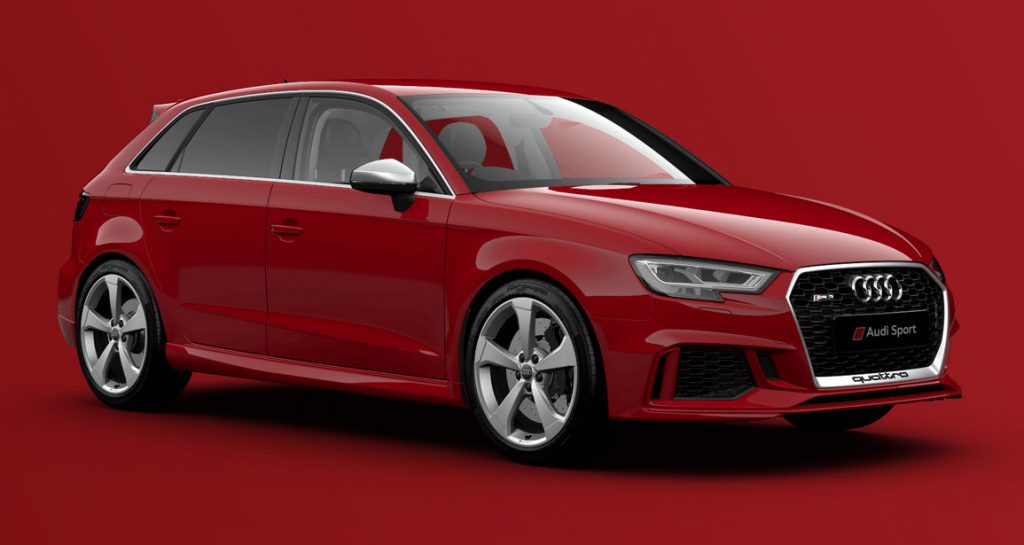 A few weeks ago I attended the UK launch of the new facelifted Audi A4 range, a desirable saloon/estate car, or Avant as they say in Ingolstadt, that does battle in the marketplace with the likes of the BMW 3 Series and Mercedes-Benz C-Class. Hence, for this month’s automotive outpourings I had fully intended to tell you about the range of A4s that I had biffed about in, with special emphasis on the all new S4 3 litre V6 Diesel hybrid with enough torque to pull up trees by their roots and a mellifluous dark exhaust note that sounds for all the world like the Almighty hawking up a docker’s oyster.

Anyway, another time, because shortly after that day out, Audi sent me the new RS3 Sportback with full Sport Edition pack (a £3K must) and 7 speed DSG ‘box. It’s such a wondrous thing that I want to share it with you.

Actually, for them what notice such things, I have reviewed an RS3 on these pages before – in saloon guise, but that was before it went to the cleaners.

Worldwide Harmonised Light Vehicle Test Procedure (WLTP) has decreed that in order for the RS3 to survive as the baddest bull goose loony hot hatchback, or small saloon, it had to be taken off the road to clean up its act on the emissions front. Would this cleaning and greening re-homologation kill its charm? Often this sort of surgery castrates cars, reducing their spunky appeal.

The new RS3, complete with petrol particulate filter and other polar bear saving fettling, has a tuneful 5 cylinder turbocharged petrol engine displacing 2.5 litres and still produces 400PS and it still shoots to 62mph and unchipped it still goes on to max out at 174mph.

Now that is very clever. The performance from what is essentially half a V10, as found in the R8 Audi and Lamborghini Hurican, is nothing short of stunning. You’ll barely notice any hint of lag as you feed power through that winning gearbox to all four driven wheels. It all feels so planted, unruffled. Though supercar fast, without all the fuss and bothersome impracticality, it is in no way intimidating to drive. And that all-wheel-drive Quattro system inspires confidence aplenty, particularly in the wet. Some lesser hotties have front wheel drive, others rear. But with this amount of German shove, Quattro it must be.

Interestingly, the particulate filter has added 25kg – an ten year-old nipper in the back then? You don’t notice at all.

You will want this car if performance with 5-door practicality is a priority. Some will choose the rear driven Benz A45 AMG. Others the Honda TypeR or the the fastest of Fiestas. I choose this RS3 for its bigger engine and the extra cylinder. This donkey delivers while singing like a crazed choir.

£47,500 and you’re in one. But you’ll need the better seats, exhaust, suspenders and all the other bits you get in the Sports Edition. So treat yourself and spend £50,285.