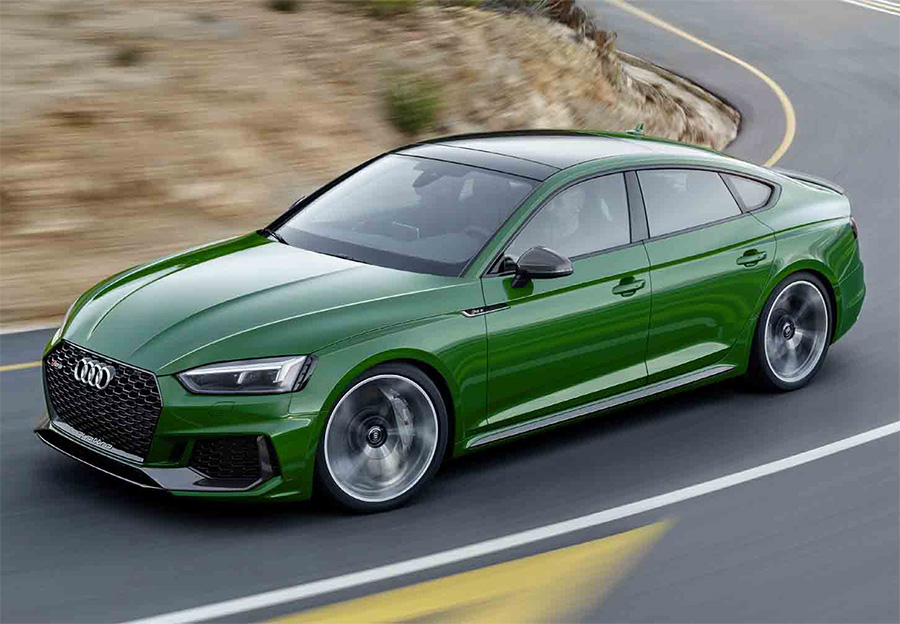 Back in the olden days – before Greta Thunberg popped her schoolgirly head above the parapet – the Audi RS5 Sportback and Coupé were propelled by thunderous normally aspirated 4 litre V8 lumps that sounded for all the world like the Almighty hawking up a docker’s oyster. Today you will find a very different donkey lurking beneath the RS5’s elegant and graciously curving bonnet. It’s shed 1100cc and two cylinders but has gained a pair of turbochargers. A 2.9 litre V6 then. And with 450PS (444 bhp) and 443 lbs/ft of grunt, it’s more powerful than ever before, albeit not as tunefully dirty.

Only 250 RS versions of the Sportback will find owners here in Boris’s Brexity Britain – the same for the equally lovely though less practical coupé. It’s up agin some pretty hefty competition from other German bruisers like BMW’s M4 and the Mercedes AMG C-Class, not to mention a personal Italian favourite of mine, the Alfa Romeo Giulia Quadrifoglio, with 500 plus bhp on tap. That’s a car you’ll buy with your heart, not your head. Another surprise bit of competition hails from the Land of the Rising Sun, in the very modern shape of Lexus RC F, with 5 litres and 471bhp.

The standout feature of the Audi against the other enthusiasts’ competition mentioned above is of course the famous Quattro all-wheel-drive setup which in normal circumstances sends power to the front and back at 40 and 60 percent respectively, so grip and traction are of the first order. The Audi may give some 60 ponies to the Alfa but, thanks to that planted grip, it’ll match the Italian job in the benchmark 0 to 62 (100 km/h) at a kidney crunching 3.9 seconds. Lovely.

Quattro grip and huge 275 section rubber painted around 20-inch rims means the RS5 can cover terrain at a stonking pace without ever running out of puff or traction. As a proper grand touring machine this capacious four-door coupé styled fastback is hard to beat for the money…not that it’s inexpensive. It flatters its drivers without scaring the crap out of them, unlike the aforementioned Alfa, which may be the catalyst of a small map of Africa in the undergarment. So, fast, eminently capable and safe. But not the most fun, perhaps. But then, not everyone in the market for such a car dreams only of track days. For what it’s designed to do, this Audi is almost embarrassingly perfect.

It’s also, like all modern Audis, a fine place in which to sit with swathes of Alcantara and stitched hide cosseting driver and passengers.

In a week of 500 miles of mixed motoring, with the taps mainly wide open I achieved a mere19mpg – but it’s only fair to point out that at legal-ish motorway speeds early thirties would be readily achievable, endowing the car with a decent pump to pump range which is, frankly, a must for yer grand tourer, no?

My sister’s lovely husband bought her a full fat 5 litre right-hand-drive Ford Mustang a couple of years ago. She loves it to bits but mostly uses it as a shopping trolley because the thirsty pony car’s tank is so small that a lowly 250 mile range is the stuff of dreams. This rather makes a mockery of the large GT badge on the boot.

In summation then…the Audi RS5 is not a car for everybody, hence the limited number over here. It is, however, more than just a halo car and it’s a mighty fine compromise, mixing awesome pace with space and practicality. The cognoscenti will spot extra large nostrils, fat chimneys and splitters here and there but otherwise it’s a discreet weapon, albeit a very handsome one.