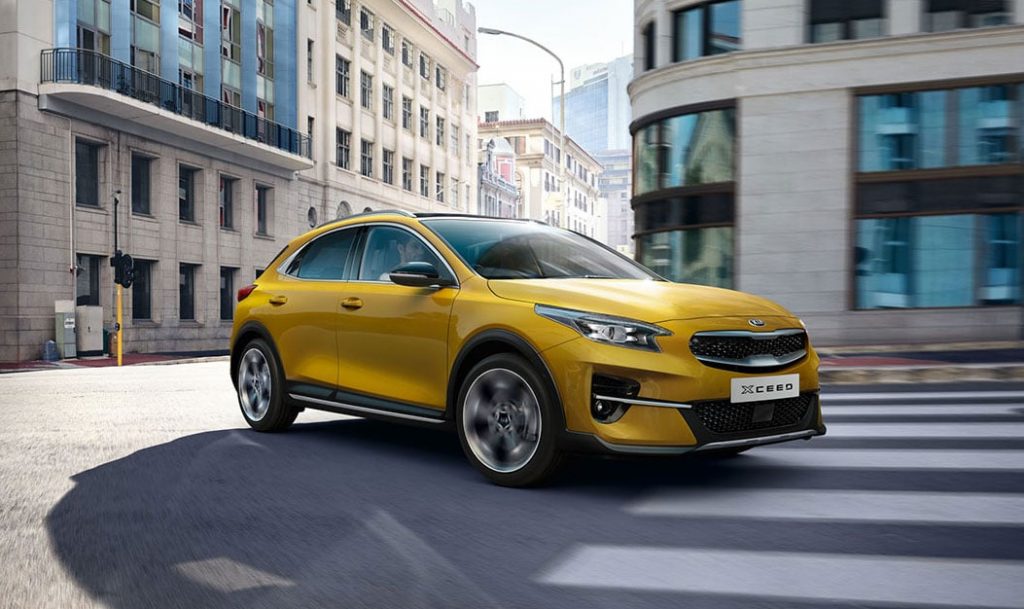 Good, but not Xceedingly so.

Normally car manufacturers’ press officers send journalists like yours truly range topping super specced up examples of whatever vehicle we have requested of them for the purpose of reviewing. The reasons for this are obvious…blind the scribbler with lots of fruit, leather and gismology in the hope that he or she might fail to clock some the car’s shortcomings, some of which may be more exposed in less well equipped examples, in many cases the cars we buy. German cars spring to mind here. Take Audi as an example.
Go tonto ticking the extras boxes on an A4 and you could easily find yourself forking out an extra twelve gorillas over a base job that looks exactly the same.

However, the new Kia XCeed featured here this month is, at my request, from near the bottom of what is a bewildering pile of Kia options, engines and specifications. Pay attention because here is the car’s full, erm, title – Kia XCeed ‘2’ 1.0 TGDi 118bhp ADAP
6-speed manual ISG. With premium paint job. Yours for £21,615.

‘2’ out of ‘3’ indicates the level of goodies. 1.0 TGDi tells you that its has a 1.0 litre turbocharged petrol engine (3 cylinders) and 118bhp. Yes, the D TGDi is confusing as that usually means Diesel. But that’s called CRDi and has 4 cylinders and a capacity of 1.6 litres. I have to study all this stuff you know. I do it for you. ADAP says an Advanced Driving Assistance Pack is fitted to the car. Basically this means that every time the front offside wheel so much as sniffs a broken white line the steering wheel writhes like a crazed black mamba in your fist as nanny tries to tuck you back over to the left, even though you wanted to cross the line because you are really keen to overtake that 44 tonne Romanian lorry you’ve been stuck behind for hours. I hate this increasingly common feature on cars. At least you can switch it off, but it re-calibrates each time you start the engine afresh. Oh, I nearly forgot the most exciting feature of all, namely ISG – Idle Stop Go, denoting that in certain conditions the engine cuts out in traffic, thus saving the driver a whole cup-full of petrol every year. Hurrah.

So, the XCeed is a Ceed that’s had its suspenders jacked up by 44mm and, for good measure some black plasticky bits thrown at the wheel arches, the front bumpers have been botoxed and ruffty-tuffty roof rails added for that look-at-me-I’ve-got-a-lifestyle image. Yeah ok, but you only get front-wheel drive across the range…and the little three pot version only gets a six-speed manual ‘box, albeit a very useable one.

I may be coming across a tad harsh here, because I actually like this little motor. It revs its nuts off quite merrily with that tuneful thrum you only get from an odd number of cylinders. It’s remarkably keen to please and surprisingly torquey. However, if you tend to carry lots of stuff or a full complement of humans, you should perhaps opt for the 1.4 litre with an extra 20bhp. You’ve been bullied into not buying a diesel, so I shan’t mention it again.

Kias are generally compliant, comfortable and reasonably good value. The XCeed, in all its guises, is no exception – but there is one caveat to that. Why bother with the XCeed with its pointless SUV looks when you have the option of the Ceed and a whole splodge of saved wonga in your wallet?

Although I like the 1.0 litre engine, I didn’t find it particularly frugal at 33mpg over a week mixed motoring. On balance, were I in this market – and I emphatically ain’t – I’d go for the more capacious and similarly priced Škoda Karoq.