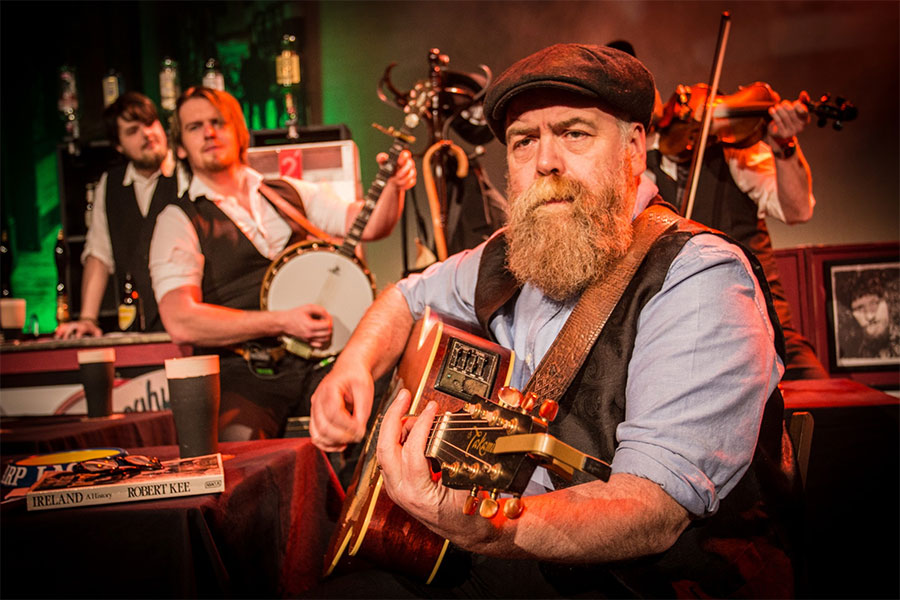 Seven Drunken Nights tells the story of the world-famous Irish band, the Dubliners, spanning fifty years of probably a lot more than seven drunken nights – the quantity of Guinness consumed equalling the prodigious talent of the musicians’ ability to play the gutsy and emotive songs the Irish people love. And so did we; this is a hand-clapping, feel good, sing along show, with the extra element that you learn how the Dubliners came to be, stuck together through it all and royally entertained their audiences along the way. Archive film footage does homage to the band and charts old times gone by with wistful nostalgia.

The highly talented musicians who make this possible, Ged Graham, Danny Muldoon, Billy Barton, Paddy Ryan, Ben Gunnery, Adam Evans and Max Gray, bring the full Irish spirit of the Dubliners alive and go at it with an enthusiasm that gathers up the audience and swings them along in fine style. As with the original Dubliners, a beard is a must and there are some pretty fulsome specimens on show here. The set mimics the bar at O’Donoghue’s pub where it all started in 1962 pints of Guinness and all. As well as being a great musician Ged Graham makes a warm and thoughtful narrator of the story of the Dubliners stretching over the years with some unusual high points; who remembers that they topped the British charts in 1967 with the eponymous Seven Drunken Nights, a song banned in Ireland for its highly amusing but suggestive lyrics.

We loved all the old favourites, Molly Malone, the Irish Rover, Dirty Old Town and at a different tempo the haunting Scorn not his Simplicity and The Fields of Athenry. Ben Gunnery is a genius of a fiddle and flute player, Billy Barton and Danny Muldoon superb guitar and banjo players, and together with Paddy Ryan and Adam Evans, they are the very essence of the Dubliners keeping alive the spirit of their music.

We loved it; at the end everybody was on their feet singing along to Molly Malone and the Irish Rover one more time in the most rousing encore that could probably be heard as far as the banks of the Liffey. The Dubliners may have all passed on but thanks to Seven Drunken Nights their music is still celebrated and passed on down to future generations.