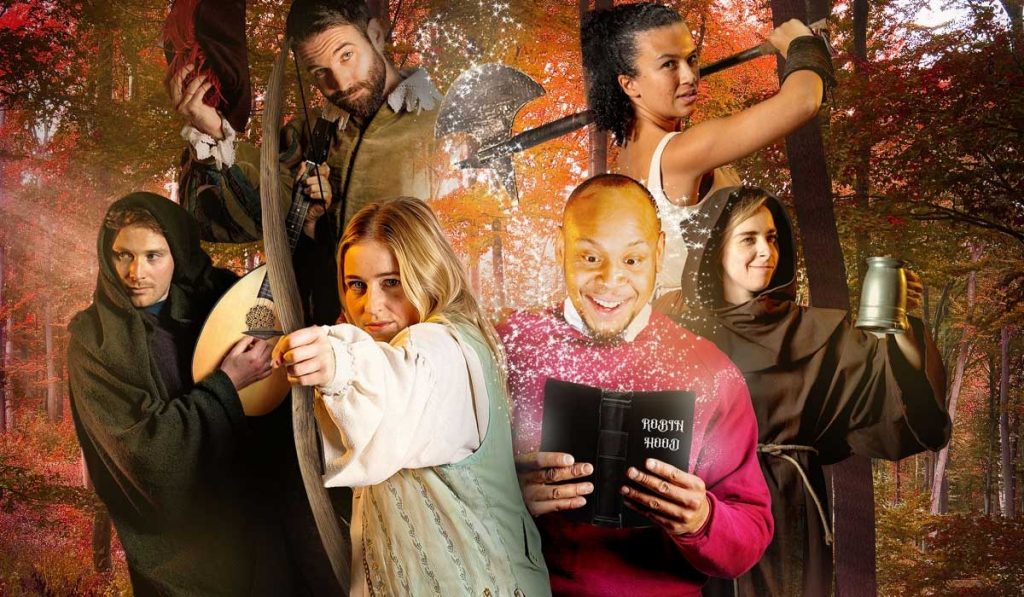 After a festive cup of mulled wine teeming with seasonal fruits and packing a punch all of its own, we joined a packed auditorium full of excited children to enjoy panto not quite in the traditional form we know it. The Wardrobe Ensemble have highjacked the plot of Robin Hood, given it a good shake and pulled it from their pockets with a flourish like a conjurer’s bunch of flowers, brimming with colourful content and a very modern slant.

Imaginative and inventive the show has some simple but very magical special effects and is full of surprises. Dorian Simpson as JJ makes a very believable small boy whose love of heroes and particularly the story of Robin Hood leads to him being taken back in time Dr Who style to the land of Sherwood Forest, Robin Hood, the evil Sheriff of Nottingham, Friar Tuck, Will Scarlet et al. Robin Hood as played by Kerry Lovell is a stroppy outlaw not much inclined to robbing the rich and giving to the poor anymore but coaxed into reform by JJ. All that’s needed is to re-recruit the once merry, no longer men, but now crew, and they will be tooled up and ready to defeat the wicked sheriff.

James Newton as the Sheriff of Nottingham has the right credentials for wickedness, dripping with malice and self-importance a more unpleasant man you couldn’t hope to meet. Jesse Meadows plays Friar Tuck without recourse to any padding yet is still the jolly fat friar (there were no chip shop jokes) that we know and love. Katja Quist is Marian with a twist – she’s now a mean sword fighter and a pugilist too almost seeing off Robin in a very good stage fight. Will Scarlet was my man of the moment played by Tom England with enviable swagger and panache. Tom Crosley-Thorne’s music is great, and the swing sequences cleverly done; we particularly enjoyed the shop-keepers dance in the first half.

We loved it from start to finish, it’s an entertaining and amusing alternative pantomime with plenty of topical jokes and a fast pace which will keep even the panto-haters in the family enthralled. So, Robin Hood like you’ve never seen him before and probably all the better for it!

Robin Hood – Legend of the Forgotten Fores runs till the 8th January 2022.