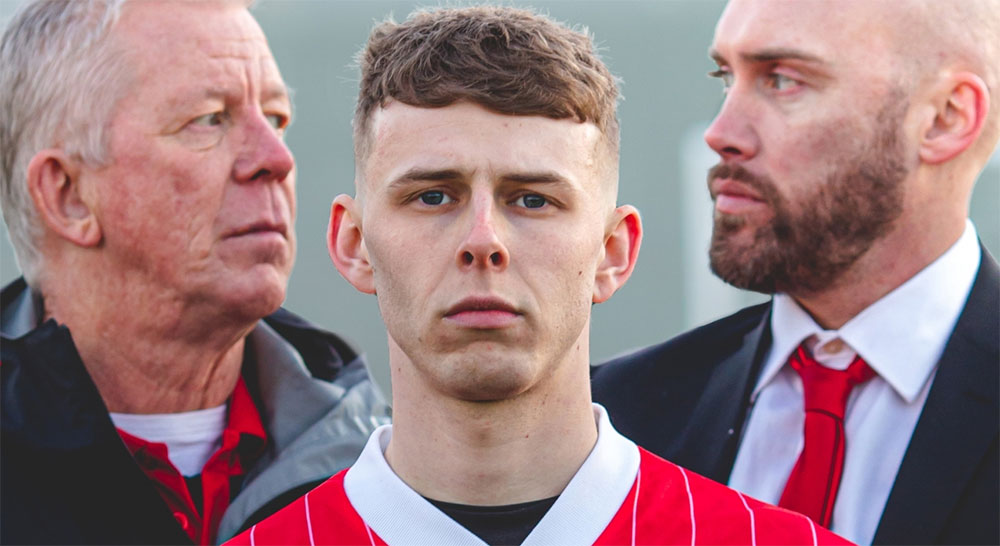 This gritty little nugget of a drama revolves around a football club formed over a century ago in a room above a pub called The Red Lion, hence the team name. Fast forward to the 21st century and the passion for it, the team spirit, the hopes and fears of the players and managers alike are all still there.

The play works well on the small and intimate stage of the Weston Studio; the audience surround the actors and you could be fooled into thinking that you can smell the sweat, embrocation, and fetid odour of dirty kit that is scattered about the players’ changing room where the action is set.

David Lloyd plays Yates; the Red Lion runs in his blood and once a great player he is now a legend but relegated to looking after the kit and the players. Joe Sims as Kidd, the swaggering, fast talking and punchy manager who’s out for his own ends just like everyone else, is very compelling and demands attention with his rhetoric rant on the glories of the game.

Thomas McGee as Jordan, the young player concealing an injured knee (from a run-in with his now absent father as a teenager), encapsulates the hunger of a young lad desperate to make it no matter what, at odds with his beliefs of honour and noble principles. The play hammers home from the perspective of all three men that the beautiful game at its core is all about the evils of money, the greed of those who have never so much as put a spiked boot onto a pitch yet are in control.

The play runs for ninety minutes without an interval and it’s a testament to the skills of the three actors that interest is spiked for all that time; my knowledge of football begins and ends with that there are feet and a ball involved but I really enjoyed this and came away feeling that I’d learned some raw truths about the game when stripped of its glamour.