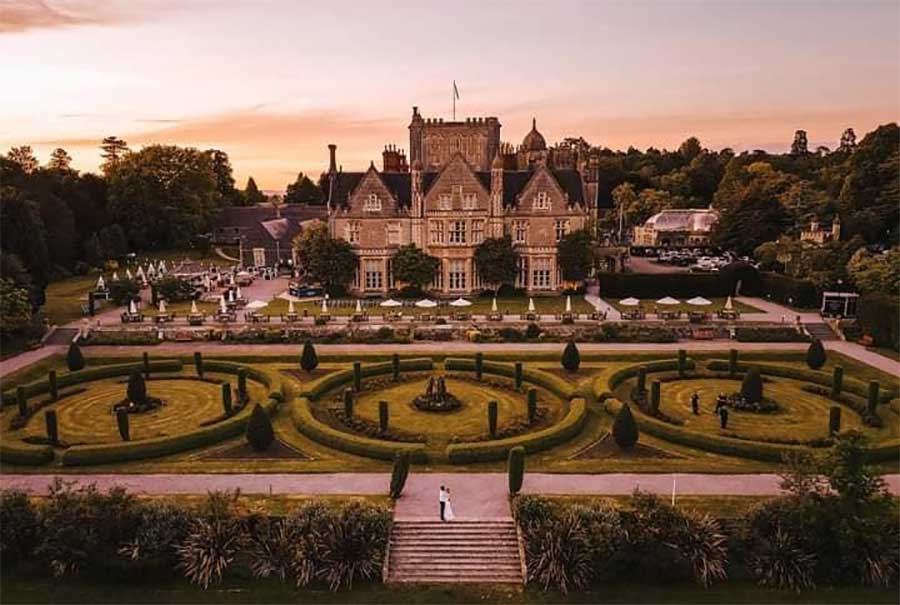 Tortworth Court has an august history having been owned by the Ducie family for over 350 years and is an exceptionally fine example of a Victorian manor house and estate. Designed by Teulon for the 2nd Earl of Ducie it sported the most modern technology of the time, gas lighting and hot air central heating and who would have thought fast forwarding to the 21st century it would now be fully equipped with Wi-Fi and you would be able to place drinks orders by Apps rather than ringing for the maid. Ravaged by fire in the 1990s, the house has continued to be sensitively restored and is now a wonderfully luxurious hotel in the most beautiful of settings. The long drive to the house through the lush and leafy arboretum created by the 3rd Earl is one of the best hotel arrival scenarios I know, and we arrived in the imposing entrance hall full of anticipation for our stay ahead.

The reception desk is dwarfed by the great carved wooden staircase marching its way to the upper floors and the correlation between the new technology enabling swift check-in and fingertip answers to any questions you may have and the antiquity of the surroundings sits well. Giving a metaphorical wave to the Ducie ancestors looking down from the walls, we made our way to our room, a Mansion House Deluxe Double living up to its name I’m happy to say. Attractively furnished with a king size bed topped with plump pillows, crisp white linen, and a large tan leather chesterfield sofa at the foot; fluffy bathrobes hanging in the wardrobe, interesting pictures and indulgent H2k toiletries in the fashionable grey-tiled bathroom, it was everything you want in a hotel room and a cosy home from home.

Tortworth Court has an excellent Spa and swimming pool and we had intended to take a swim before dinner but it was a lovely evening and we were seduced by the thought of an aperitif to be taken on the terrace overlooking the formal gardens. Glass in hand we enjoyed the peace and tranquillity of the landscape and admired the sweeping architecture of the house in all its glory before taking a seat in the 1853 restaurant for dinner.

The dining room is lofty and imposing; intricately carved wooden panelling and ornate gothic arches dominate, and the atmosphere is redolent of all past good dinners that must have been taken here. This night would be no exception – the menu is reassuringly short meaning all is freshly cooked but with choice enough. To start we ordered sautéed king scallops with cauliflower purée, chorizo and pea shoots, and ham hock and parsley terrine with piccalilli and toasted croutes. Who could resist a Casterbridge 28 days dry aged sirloin steak with all the trimmings? Not us, so one of those for main course, and rigatoni alla parmigiana, sounding delicious with a tomato basil sauce, bocconcini and baked eggplant. 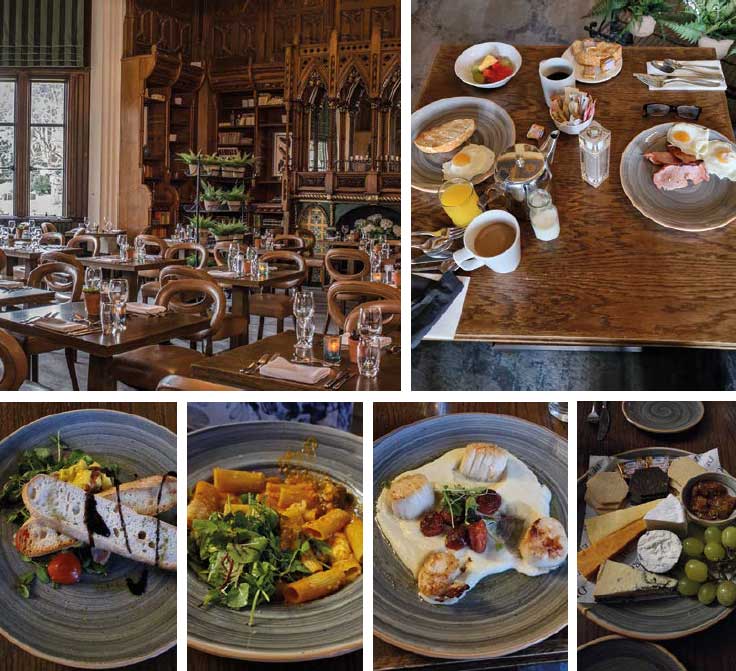 We both very much enjoyed our starters; the scallops were exceptional, fat and juicy and perfectly timed in the sauté, the ham hock terrine plentiful and it’s unusual topping of piccalilli was a good spicy foil for the richness of the ham. A glass of Tuffolo Gavi paired with the starter, it had to be a glass of Argentinian red for our main course in the shape of a Malbec recommended on the menu which proved to be admirable.

Our main courses arrived looking enormous – the sirloin steak with more chunky fat chips than you could eat in a week, and a large bowl of rigatoni, not the smallest of pasta shapes, scattered with bocconcini (small mozzarella balls) and the baked eggplant. Whilst I launched into this, I hung onto the fact that apparently eggplant is very low in calories but on the other hand perhaps rigatoni isn’t! Both dishes were great but, in the end, we retired defeated by the portion size, and the fact that maybe we would like a dessert.

The dessert menu has lots of old favourites on it – key lime pie, raspberry cheesecake and classic tiramisu but we liked the look of a regional artisan cheeseboard to share, with five types of cheeses : Cotswold brie, Quickes mature cheddar, Rutland red, Cropwell Bishop Stilton and Golden Cross, a goat’s cheese. Pleasingly presented with a choice of crackers and a little dish of chutney, we had a marvellous time chomping our way through all five and choosing a favourite, both agreeing that the very tasty Stilton got the prize.

After a soothing night’s sleep, we were back in the 1853 restaurant for a leisurely breakfast which is both a buffet and cooked to order if you wish. The buffet is laid out in spectacular fashion with everything you could wish for, a cool and inviting display of fresh fruits, watermelon, pineapple, grapes, halved grapefruits both pink and ordinary, all arranged abundantly. A choice of breads, crusty, white, brown, jams of all sorts, pastries, a “hot” section covering the full English menu with the tray of fresh and perky fried eggs disappearing as fast as they could be replenished. With good coffee and orange juice it was a terrific start to the day, dispelling any hint of a fuzzy head brought about by those glasses of Malbec.

We had a lovely time and as we were leaving I took a look at the Afternoon Tea menu, delicate finger sandwiches, scones with clotted cream and fruit jam, tarts and cakes served with Twinings teas or if you really have something to celebrate, a glass of Pommery Brut Royale. To be saved for another day, I think!