Bedminster Parade is a beguiling mix of art galleries, restaurants and car accessory stores just south of the river. As befits this unusual set of bedfellows, Ganesha is a far from a standard, common-or-garden Indian restaurant. It's a family-run venture offering authentic Indian cuisine from all corners of the subcontinent via a menu that’s a million miles away from your average curry house.

When Ganesha opened its doors on Bedminster Parade in March 2008, there were probably a few raised eyebrows.

A small, 70-cover restaurant serving authentic food from Southern India in the shadows of Bedminster Asda, it was a big challenge for owner Mayur Renukdas and his wife. The couple had never run a restaurant before, and were on full-time jobs when they weren’t putting in some serious hours in the restaurant.

Nine years on, and it's still going strong; not only surviving a recession, but doubling in size! Mayur and his wife hail from Pune, which is one of the most popular Indian cities. Both are very keen to point out that the food they specialise in is very different from the standard bog style of cooking found in the most common Bangladeshi or Pakistani restaurants.

Inside, the decor has some exquisite drapery boasting of colourful silk saris and twinkling fairy lights. The pillars inside have been painted chocolate brown and have also been decorated with silk ribbons. The brown leather banquettes makes for a more intimate dining experience; while feeling spacious and airy at the same time. The old white walls are now a warm coffee colour with Indian prints and instruments on shelves. Overall combined with the lighting, it makes for a striking ambience.

The menu remains true to its Indian roots without too much compromise to the more Anglicized Indian restaurant dishes. There is an abundance of fish, seafood, lamb, ginger, coconut and Goan spices used in the food, which tends to be milder and more aromatic than the usual balti house fare.
Typical dishes include

Masala Dosa (Starter) - An enormous triangle of lacy-edged pancake sealed at the edges, it contains a hot filling of mustard seed-speckled potato bhaji in the centre. This is a popular breakfast dish in India and it would undoubtedly set you up for the day, especially with the delicious coconut chutney and sambhar (a sauce made with dal, curry leaves, tamarind and about eight different spices).
Sheek Gilafi Kebab (Starter) - Thick, juicy kebabs of lamb mince flavoured with ginger, coriander and spices, served with a soothing minty yoghurt dip.
Bhagara prawns (Starter) - King prawns marinated in ginger, garlic and spices, then fried in a light batter and scattered with fresh coriander.
Murg Makhani (Main Course) - Boneless chicken Tikka pieces cooked in a rich creamy sauce.
Gosht Dahiwala (Main Course) - Boneless tender lamb pieces marinated in yoghurt and then cooked in a Hyderabadi style spices.
Gosht Nilgiri (Main Course) - Tender chunks of lamb immersed in a thick green/grey sauce of mint, coriander and spices – one of our best-sellers.
Kozhi Varutha Curry (Main Course) – A medium/hot dish of chicken in a smooth, subtly spiced curry of tomatoes, onion, herbs and curry leaves. A traditional Kerala curry, it has some heat but not enough to mop the brow!
Bhagara Baigan (Side Dish) - Aubergines cooked in a peanut and thick onion tomato sauce.

Ganesha has built up a large and loyal following over the past two years and it's move to bigger premises is proof enough that there is an increasing demand for regional Indian cooking rather than the same old Chicken Tikka Masala joints. 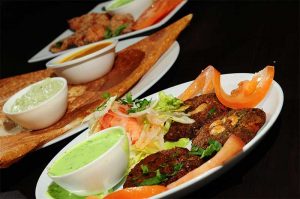 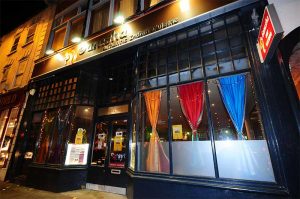 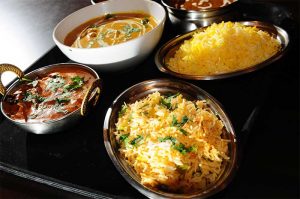 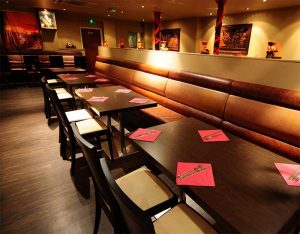 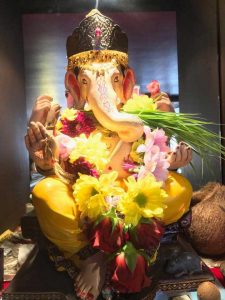 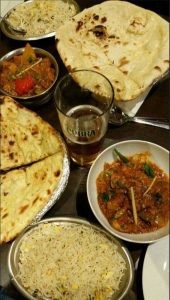